Archives:
India, September, 09 2014 - Last spring, in the context of a broader study on financial inclusion in rural Tamil Nadu, we piloted and compared three different ways of capturing interest rates in a household survey, to try and understand what sorts of questions would elicit the most accurate responses from households.

Interest rates may be important, but that doesn’t make them easy to measure.

Interest rates have long been a concern for policymakers and households alike. Indian States began regulating the interest rates charged by moneylenders as early as the 1940 Bengal Moneylenders Act, which placed strict upper limits on the interest rates that lenders could charge. Interest rates are also limited for more formal lenders; the Reserve Bank of India may have removed the cap of 26% interest rates on microfinance loans, but MFIs are still regulated in what they are allowed to charge.

Regulations regarding interest rates come out of concerns that households are being taken advantage of by lenders. Without caps on the market, households may be too desperate – or may not understand finances well enough – and ultimately pay a steep price for funds. Conversely, lenders argue that particularly in areas where lending is risky, the cost of doing business is so high that capping interest rates prevents them from transacting at all.

The complexity of interest rates makes them particularly difficult to understand, particularly from a household’s perspective; converting from a declining balance interest rate to a simple interest rate is a complex affair, involving the precise number of payments. Interest rates for loans of different lengths are also not directly comparable without additional calculations. In practice, it is hard to expect households to know whether a loan is competitively priced on its face.

As researchers, we also struggle with the question of understanding interest rates. When studying financial inclusion, accurately capturing interest rates is of paramount importance, but also uniquely difficult. In rural India, households borrow not only from formal banks, cooperative banks or microfinance institutions, which tend to have rigidly structured loans, but from self-help groups, moneylenders, pawn brokers, and even friends and neighbors, whose loans tend to be much less structured, and much less formal. Researchers are tasked with not only finding ways to compare these interest rates, but with doing so by gathering information from households, who, although they tend to have an excellent sense of their own financial situation, may not be able to describe their interest rates in technical terms.

Interest Rates in the Field: Piloting in Tamil Nadu

Last spring, in the context of a broader study on financial inclusion in rural Tamil Nadu, we piloted and compared three different ways of capturing interest rates in a household survey, to try and understand what sorts of questions would elicit the most accurate responses from households.

The first two methods of calculating the interest rate followed the same approximate pattern – first, calculate the total amount which will be repaid over the life cycle of loan, then calculate the percent difference between that and the principle amount. The goal is to estimate the interest rate without asking highly technical questions or constructing complex interest rate equivalences.

In the first method, the household is asked directly about the total amount they repay; in the second method, the amount is constructed based on the household’s answers to questions about the loan structure and their payments. The third method instead asks for a direct measure of the interest rate, i.e. “On Rs. 100 borrowed, what is the amount of interest you have to pay?” Although this method is not sophisticated in terms of distinguishing between structures or types of interests, we use it to treat the self-reported measure of interest as a crude measure of the actual interest rate.

The pilot was conducted in a semi-urban area outside of a large city in central Tamil Nadu. Over the course of several days, 81 households were interviewed, reporting a total of 234 loans.

Loans from microfinance institutions were the most common, comprising a quarter of the total loans reported. Households also reported a substantial proportion of loans from nationalized banks and pawn brokers, and, decreasingly, from friends, neighbors and relatives and from primary agricultural cooperatives. Private bank loans, despite the proximity of this area to a fairly large city, were relatively uncommon within the sample, as well loans from ROSCAS (rotating savings and credit associations).

Joint lending group loans (the classic MFI or SHG loan) and jewel loans made up over 70% of the sample. As one would expect, the majority of JLG loans – nearly 90% - were reported as from microfinance institutions, non-banking financial corporations or self-help groups. Most of the rest of the loans reported did not require collateral, although a small percentage of households reported that they were required to provide land as collateral for their loans. 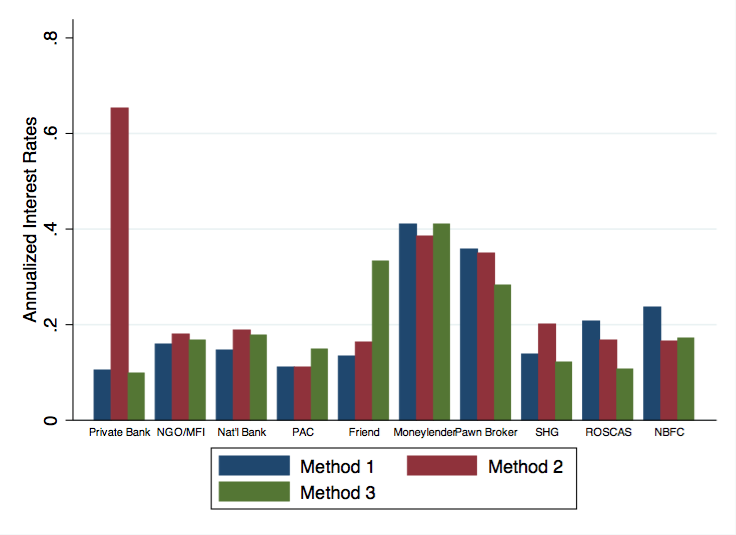 Consistently, across all three methods, the highest interest rates were reported from loans from moneylenders and pawn brokers. Correspondingly, although the figure is not included, joint lending group loans tended to have lower interest rates than jewelry loans and unsecured loans both. The only exception was the interest rates calculated via Method 2 (which asks about loan structure, and uses repayment frequency and repayment size to calculate the total amount which the respondent will repay) for private bank loans. This – and informal observation during the survey process – suggests that in the case of formal loans, respondents often struggle to reproduce precisely their loan schedule, but do have a good sense, overall, of the cost of the loan and the interest rate which they are required to pay.

How does understanding the extent to which self-reported interest rates are accurate and internally consistent contribute to the broader debate about financial inclusion in India? Outside of its obvious relevance in research and impact evaluation, the results of this pilot suggest – tentatively – that, at least when assisted by surveyors, relatively low-income rural respondents, the majority of whom had little to no financial literacy training, were relatively accurately able to report on the interest rates they faced. Respondents could not necessarily describe their loans in technical terms; they did not necessarily know precisely their annual percentage rate, or any of the other statistics used by financial corporations. However, we found that respondents knew what they would be required to pay back in total, and knew whether a loan was a good or bad deal. In short, they did have a good sense of how much they were paying for the money that they had borrowed.

We can’t conclude from this that interest rates don’t need regulation, and the results of the pilot don’t address the constraints that households face when there are few lenders to be found. That being said, the results are encouraging; as financial inclusion improves in rural India, and as households have the opportunity to borrow from a wider range of lenders, this pilot suggests they will do so with a practical, if not technical, understanding of the interest rates they face.