Archives:
Global, November, 19 2013 - Gender-based financial exclusion is deeply ingrained across the world. According to a recent paper by the World Bank more than 1.3 billion women are "largely outside the formal financial system".

Academics refer to the “gender gap” in access to financial services. Regionally, the gap is largest in South Asia, where 41% of men report having a savings account compared to only 25% of women (see graph). Women are also less likely to get credit, whether from a bank or a more informal moneylender. 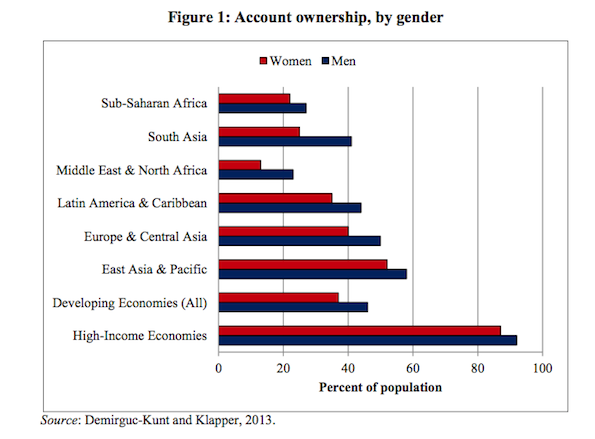 ^
Explaining the problem is tricky. Some research suggests that the lower use of financial services by women can be explained by other gender-based differences. Men are likely to be in better-paying jobs, and so are more likely to need savings accounts. Female entrepreneurs may also choose to enter less capital-intensive industries which require less debt and therefore less finance. In sum, there may be no direct gender-based financial discrimination (the question of indirect discrimination is less clear).

But other issues may directly affect women’s access to financial services in developing countries. The paper looks at legal obstacles. The raw data are alarming. In 10 out of a sample of 90 developing countries, women are legally required to obey their husbands. Men and women are treated equally by the law in only 80% of countries (that is according to the criteria relevant to the research; the true figure will be much lower).

Legal and cultural norms have a big impact on the chance of women getting equal (or any) access to financial services. A few isolated examples make for uncomfortable reading. In many Middle Eastern and South Asian countries, a woman requires a husband or male family member to co-sign a loan. Other research suggests that in Pakistan banks require two male guarantors who are not family members before they loan money to women. (People in the world’s richest countries cannot be smug—recent research found that British banks practised widespread sexual discrimination.)

Isolated examples do not amount to ingrained discrimination. But a series of fascinating calculations, based on records of 150,000 interviews, illustrates the scale of the problem. In countries where women face legal discrimination in the ability to work or are required by law to obey their husband, women are significantly less likely than men to own an account. They are also less likely to borrow. And similar results are found when daughters do not have equal inheritance rights to property from their parents.

But things may be getting better. Another recent report from the Bank suggests that many countries are gradually dismantling longstanding discriminatory practices. Out of 143 economies surveyed in the study, in the past two years 44 economies have made legal changes that increase women’s economic opportunities. Côte d’Ivoire and Mali are among the countries with the most reforms. (In these two countries, for example, husbands can no longer unilaterally stop their wives from working.)

Others are getting in on the act. Rafia Qureshi, of the JP Morgan Chase Foundation, which funds charitable work in developing countries, says that her organisation supports projects to improve female entrepreneurship in Lebanon. And humanitarian agencies like Oxfam and ActionAid increasingly see women as agents of economic development.

But more should be done. When women cannot save, they are vulnerable to income shocks. If women cannot borrow, they cannot invest in their future. Gender-based financial exclusion means that the developing world operates at massive under-capacity.